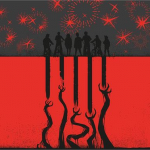 Hey Stranger Things Fans!!!!! Just Letting you know that everything i write and post is all my opinion and im just sharing s enjoy!!!!

Ok so if you think about it before El left Hawkins lab she never got tierd or passed out from using her powers.El wouild always just use her powers and it didn't hurt her. In season one episode El passed out after she killed Dr.Brenner's associates and El didn's wake up for a while and Mike knew somthing was wrong,and then Dr.Brenner grabed El and told her thta she was sick and that he would take her home and make her better.

What if Elevens source of power is the Mind Flayer? What if in season one she was working for the mind flayer but she didn't know,she was just doing what she was told to do.What if she is basically useing her powers againt herself and it's hurting her.Ok so i know this sounds crazy but if you think about it after season one she is always against the mind flayer and his flayed.Khali (008) in season two gets into El's head and makes a vission of Dr.Brenner saying that (El has a wound,a terrible wound and it's festering. And eventually,it will kill you.) and then Khali says, at the end of season two episode seven " El: I have to go backm my friends are in danger Khali : There's nothing back there, they cannot save you,jane. El: No.But i can save them.

This is what i think, I hope what Dr.Brenner said isn't true. Well let me know what yall think !!!!

Retrieved from "https://strangerthings.fandom.com/wiki/User:KaylaheartsStrangerThings011?oldid=55648"
Community content is available under CC-BY-SA unless otherwise noted.