Thomas "Tom" Holloway was a recurring antagonist in the third season of Stranger Things. He was a journalist and the Editor in Chief of the Hawkins Post.

In 1985, Tom became the boss of Jonathan Byers and Nancy Wheeler as they started working at the Post. However, Tom treated Nancy with cruelty as he did not hold women in high regard, despite having a wife and a daughter. After his daughter, Heather became possessed by the Mind Flayer, she allowed Tom and his wife to be possessed as well. After becoming flayed, Tom fired Nancy and Jonathan to keep them from investigating a story related to the actions of the Mind Flayer. Later, Tom, along with his co-worker Bruce Lowe (who also became possessed) tried to kill Nancy and Jonathan at the Hawkins Memorial Hospital as the two came to see the flayed Doris Driscoll, only for Tom to be killed by Jonathan.

Tom Holloway was a journalist and the owner of the Hawkins Post, the newspaper for the town of Hawkins. He married a woman named Janet and they had a daughter named Heather. Sometime before the summer of 1985, Tom hired Nancy Wheeler and Jonathan Byers at the Hawkins Post. However, due to his team of journalists being mostly male, Tom, along with Bruce Lowe mocked Nancy for being a girl with the dream of becoming a journalist.

Tom was a man who always looked for a good story to be published for the newspaper. However, he was a sexist as he treated the women working at the Hawkins Post, especially Nancy Wheeler, with disdain. Ironically, despite his sexism, he cared deeply for his wife and daughter. After becoming one of the Flayed, Tom slowly started losing aspects of his personality and tried to kill both Nancy and Jonathan Byers when the two went to the hospital to see Doris Driscoll.

Tom and his daughter Heather seemed to have a good relationship. When Heather became one of the Flayed, Heather apologized to her dad before knocking him unconscious. When ungagged, Tom pleaded with his daughter to stop what she was doing, believing she was being manipulated by Billy Hargrove. However, his pleas were ignored and his daughter allowed him to be possessed by the Mind Flayer.

Tom had an adequate relationship with his wife, Janet, but it is seen that he can be sharp with her, as seen during dinner. When Janet fell to the floor unconscious, after being drugged by Billy, Tom rushed to his wife and urged Heather and Billy to call 911.

Tom seems to have a good relationship with his employee Bruce. He and Bruce enjoyed making fun of Nancy Wheeler for being a woman and working at the Hawkins Post, though Tom did not harass Nancy as much as Bruce did. After they both became flayed, Tom and Bruce worked together to attempt to kill both Nancy and Jonathan Byers when they both came to visit Mrs. Driscoll at the hospital when they were flayed.. When they both got Mutilated by the two teens, their bodies were melted by the Mind Flayer and merged to form a hideous monster to finish Nancy, only to be stopped by Eleven.

Nancy Wheeler was hired by Tom to work at the Hawkins Post. Despite her being around the same age as his daughter and her hard work, Tom treated Nancy awfully for trying to be a journalist. When Nancy picked up a report on "diseased rats" and presented it to Tom, he dismissed the story and ordered Nancy to stop pursuing it. However, she disobeyed him by trying to look for proof, only to find Mrs. Driscoll ferociously eating fertilizer. As a result, Tom fired both Nancy and Jonathan. When the two tried to visit Mrs. Driscoll at the hospital, Tom, who became possessed by the Mind Flayer, attempted to kill Nancy and Jonathan, with Bruce's help. When their bodies melted and combined to form a monster, it almost killed Nancy until it was stopped by Eleven, leaving it to become part of the Mind Flayer's avatar.

Jonathan Byers was hired by Tom to work at the Hawkins Post as the photographer for the Hawkins Post. Tom, however, did not treat Jonathan awfully, just like he does with Nancy. When Jonathan helped Nancy look for proof for Mrs. Driscoll's rat story, Tom fired Jonathan as a result. When the two tried to visit Mrs. Driscoll at the hospital, Tom, who became possessed by the Mind Flayer, tried to kill Jonathan and Nancy, with Bruce's help. Tom fought Jonathan and tried to kill him, while Bruce took care of Nancy. Tom gained the upper hand and was about to kill Jonathan with scissors until he felt Bruce's pain when Nancy hit him with a fire extinguisher. This allowed Jonathan to kill Tom by stabbing him in the neck with the scissors. After Tom's and Bruce's bodies melted away to form a monster, it was stopped by Eleven from killing, Nancy, where it left to become part of the Mind Flayer's mantle. 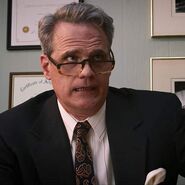 Tom after being knocked out by a flayed Heather.

Tom is chocked by a flayed Heather.

Tom with a flayed Heather in the steelworks before he is flayed.

Tom being flayed by the Mind Flayer.

Tom feeling Bruce's pain due to the hive mind.