Tim Ives is the main director of photography (cinematographer) for the Netflix original series Stranger Things. He is currently working on for the third season.

Tim Ives has worked as cinematographer for television shows, films, commercials and music videos since 1995.

He has been the director of photography on many television series including Girls, Mr. Robot, House of Cards and How to Make It in America.

The Duffer Brothers liked Ives' work on Girls, the Mr. Robot pilot and House of Cards and selected him as director of photography shortly after the show was green-lit by Netflix. Ives received their pitch package which he found "amazingly well defined," commenting that "I hadn’t seen anything like this concept in a while."[1] 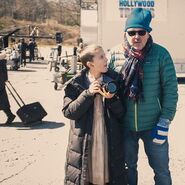 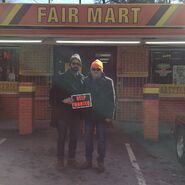 Tim Ives on set with Noah Schnapp for "Chapter Eight: The Upside Down"
Add a photo to this gallery

Retrieved from "https://strangerthings.fandom.com/wiki/Tim_Ives?oldid=46352"
Community content is available under CC-BY-SA unless otherwise noted.