Lucas, Mike and Dustin try to talk to the girl they found in the woods. Meanwhile, Hopper questions an anxious Joyce about an unsettling phone call.

After finding Eleven in the woods, the boys bring her back to Mike's house for the night. Lucas thinks this is a terrible idea and suggests they tell Mike's mom Karen Wheeler right away, but Mike points out that would just get them all grounded, since they were not supposed to be out looking for Will Byers. Mike gives her clean clothes to change into. He also nicknames her "El" and builds her a pillow fort to sleep in.

The next day, Mike brings her breakfast. He tries to get Eleven to sneak out of the house and to the front door to make it look like she stumbled upon the house, and that way his mom can help. Eleven rejects his idea, telling Mike that "bad people" are looking for her, and that revealing her whereabouts will only make things worse.

Meanwhile, Joyce talks to Chief Hopper about the creepy, static phone call she received. Hopper is reluctant to believe her story, but admits the charring on the phone from the surge of electricity is weird. Later, Joyce heads to her workplace to buy a new phone and demand two weeks pay in advance from her boss. He shows some sympathy for Joyce after he realizes her kid is missing, and gives in.

Back at Mike's house, Mike, instead of going school, acquaints Eleven to his house. Eleven notices a picture of the four boys and points at Will. She knows him, but just before Mike can ask more questions, his mom comes home (Mike was supposed to be at school). Mike rushes Eleven to hide in his bedroom closet, which freaks her out. Mike promises her that he wouldn't tell his mother about her and Eleven trusts him enough to close the door. However, upon closing, Eleven experiences a flashback and remembers an disturbing incident where she was being dragged to a dark cell in the Hawkins National Laboratory and kept confined by a tall, white-haired man she knows as "Papa." Recalling the event, she begins crying in fear. But when Mike opens the closet again, Eleven becomes surprised and happy to see Mike keeping his promise.

Later, Mike explains the situation regarding El to Dustin and Lucas and her knowing about Will's disappearance and urges them to help her. Lucas, unconvinced, tries to tell Mike's mom about Eleven, but Eleven stops him by using her telekinetic abilities to close Mike's bedroom door. At this, Lucas and Dustin begin to trust her too.

At night, Mike, bringing Lucas and Dustin to the basement as well, brings food for Eleven and asks her if she knew where their friend Will is. Eleven doesn't know what the word "friend" means and so, Mike explains it to her. Eleven then uses the boys' Dungeons and Dragons set to show them Will is hiding from a monster. The cops find a drainpipe in the woods which leads to the Hawkins Laboratory, and they believe Will might have crawled through it.

Joyce receives another creepy, static call which surges with electricity and shocks her again. The lights in her house begin to turn on one by one, leading to Will's bedroom. Suddenly, one wall begins to move and takes on some weird shapes. Joyce quickly runs out of the house and into her car, but later turns and goes back into the house.

Meanwhile, at Steve's party, Barb, Nancy's friend, feels like a third wheel. Barb sits near the pool by herself, with Jonathan, hiding in the woods near the pool, taking her picture before leaving. Jonathan fails to notice a mysterious monster as it abducts Barb.

Although Steven Spielberg's E.T. the Extra-Terrestrial is referenced throughout the first season, the allusions to the film are at their most prominent in "The Weirdo on Maple Street". The Duffer Brothers have said: "Just as E.T. is about the connection between E.T. and Elliot, [The Weirdo on Maple Street] is about the connection between Eleven and Mike."[1]

In the film, Elliot feigns illness to stay home from school and be with E.T. He shows E.T. his toys, including Star Wars figures. Mike does exactly the same, showing her his Yoda figurine. When alone, Eleven explores the Wheeler house, becoming mesmerized by the television; E.T. did the same in Elliot's home.

The shooting style, music and cutting pattern of the scene when Eleven sees the picture of Will is closely modeled after a scene from Peter Weir’s 1985 film Witness, when Samuel Lapp (Lukas Haas) points out the evil Lt. James McFee (Danny Glover) to Det. Capt. John Book (Harrison Ford).[1]

Lucas says Eleven might be an escapee from Pennhurst State School and Hospital – "the nuthouse in Kerley County," referencing the real-life psychiatric hospital which closed in 1987.

When Mike points out that they can’t tell their parents about Eleven because they weren’t supposed to be out tonight, Lucas says their houses would become Alcatraz, referencing the maximum high-security federal prison on Alcatraz Island which operated from 1934 to 1963. 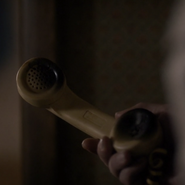 Retrieved from "https://strangerthings.fandom.com/wiki/The_Weirdo_on_Maple_Street?oldid=50904"
Community content is available under CC-BY-SA unless otherwise noted.