"Chapter Seven: The Lost Sister", (originally "The Secret Cabin"), is the fifteenth episode of Stranger Things and the seventh episode of the second season. It premiered on October 27, 2017.

Psychic visions draw Eleven to a band of violent outcasts and an angry girl with a shadowy past.

Eleven explains to Becky Ives what she saw in her mother's visions, specifically the dark-skinned girl that she was shown repeatedly. Flipping through Ives' files on other experimental children, Eleven identifies the girl through a photograph as Kali Prasad, a young girl abducted from England. Eleven sees a vision of an older Kali standing over a fire in the void, and finds Becky trying to get in touch with Jim Hopper and Joyce Byers over the phone when she goes to tell her. Eleven takes money from Becky's wallet and leaves, now knowing Kali's location. As Ives sits in front of the TV, the channel changes to "Action News 8".

On the bus, Eleven has more intense visions of where Kali is hiding. She arrives in Chicago and finds the place she saw in her visions, an abandoned warehouse. She finds four people sitting around the same fire from her vision, Kali not among them. A suspicious man confronts her and threatens her with a knife, until he sees spiders crawling on his hand and drops it in a panic. Kali appears and Eleven gives her her picture, as well as demonstrates her powers by taking the man's knife with her mind. Eleven introduces herself as Jane, and Kali takes their wrists to show their numbers tattooed there. They recognize each other as sisters and embrace.

Eleven explains her situation to Kali, who says that Hopper is being naive if he thinks he can bargain with the men from Hawkins National Laboratory, as Eleven will always be a monster to them. She refers to their powers as "gifts," and explains that hers is the ability to manipulate minds and make them see illusions of her choice. Kali confesses that she feels more complete with Eleven there, and that her new home could be with her, which Eleven seems open to. Kali explains to her group that Eleven was able to find her with just a picture, which will be able to help them in their endeavors that seems to involve murder. Eleven has a vision of Hopper apologizing to her through the radio, Kali wakes her up before she can react.

She introduces Eleven to her group, the man who threatened her being named Axel, as well as the young Dottie, the defensive strategist Mick, and the sensitive fighter Funshine. Kali shows her their collection of identities, all of people who worked at the lab, who they hunt down and kill in retribution. She explains that Eleven needs to confront the pain instilled on her by the lab so she can heal from it and become stronger. She has Eleven pull a train car to them with her powers, encouraging her by telling her to think of things that anger her. She thinks of Max Mayfield interacting with Mike Wheeler, Hopper claiming her mother is dead and her fight with him, and the various injustices done to her by the lab. She manages to pull the train with intense effort.

Eleven identifies Ray Carroll, one of the men who put her mother in her catatonic state. She locates him and the group gears up, as well as giving Eleven a more punk look that Dottie refers to as "bitchin'," a phrase Eleven adopts. A police officer stares at their van as it drives by. Eleven uses her powers to help them rob a convenience store as they drive to Carroll. They break into Carroll's apartment wearing masks and restrain him. Kali and Eleven take their masks off, and Carroll recognizes them when Kali makes him see them as children. Carroll begs for his life and claims that Martin Brenner is still alive, and that he can take them to him. Knowing that Eleven can find him anyway now that they know he is alive, Kali tells Eleven to kill him. She starts to strangle him just as Axel and Dottie find his daughters in their room, phoning the police. Unable to kill him knowing he has children, Eleven lets Carroll live and stops Kali from shooting him. They drive off, and Kali warns Eleven to never take away her mercy.

Back at the warehouse, Kali tells a troubled Eleven that she was once opposed to killing as well and had a family like her and Hopper, but they were unable to help Kali, so she left. She insists that Eleven needs to face Brenner, and when Eleven firmly states that he is dead, she makes Brenner appear to her. He tells her that she has a wound born from her pain that will eventually kill her if she does not confront it. She leaves Eleven with the choice to return to her friends or stay with her and avenge her mother. She remembers Mike nicknaming her, defending him and Dustin Henderson from bullies, and helping Hopper set up the cabin. She enters the void and sees Hopper nervously watching the lab's control panel as well as Mike trying to get into the control room to warn them of the trap. Realizing they are in danger, Eleven decides to go back just as the police raid the warehouse. As Kali's group gets in a shootout with the police and Kali stalls them using her powers, Eleven says goodbye to her and flees as Kali calls after her.

On a bus, an old woman notices Eleven's distress and sits with her, asking where she is headed. As the bus enters Indiana, Eleven tells the woman she is going to her friends. 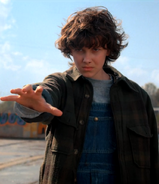