Chapter One:
The Hellfire Club

Still feeling from the events last year, the gang tries to move on with their lives. However, a threat is brewing both on Earth and the Upside Down.

On September 8, 1979, Martin Brenner prepares for work as he heads to Hawkins National Laboratory. Arriving there, he enters the lab's newly-built Rainbow Room, now full of child experiments. He approaches Ten, playing with a Magic 8 Ball, asking if he's ready for more lessons. Shaking the ball, Ten agrees when it says "All signs point to yes". As they walk through the lab and pass a woman named Dr. Ellis along with another experiment named Six, Brenner and Ten begin their experiments. Brenner first has Ten use his abilities to see what Brenner is drawing on his pad. After succeeding, Brenner then asks if they could do something more challenging by seeing what Dr. Ellis and Six are doing in the other room. Ten sees in a vision Dr. Ellis and Six doing an experiment, but Ten begins to hyperventilate as he says that something is wrong, saying that they're screaming. Suddenly, the lab's alarms begin to go off. As Brenner asks what's happening through the intercom, Ten says that Six and Dr. Ellis are dead. Brenner slowly heads to the door leading to the lab as he hears screams and impacts, when the door bursts off the hinges and hits Brenner, knocking him unconscious. When he awakes, he's horrified to find Ten dead from the impact of the door. As he limps outside, he sees experiments, security guards, and fellow doctors dead and bloodied. When reaching the Rainbow Room, he finds the playroom full of dead children, all except one standing near the broken two-way mirror, breathing heavily. Brenner angrily asks what the experiment has done. The experiment, revealed to be a young Eleven, turns around slowly, with her eyes, nose, and ears dripping with blood. 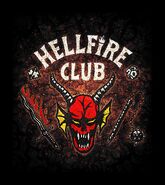 The Party at school

Joyce with the package

Joyce on the phone

El trying to use her powers again