Stranger Things 4, the fourth season of Stranger Things, was announced on September 30, 2019.[2] Unlike previous seasons, this season is split into two volumes, with the first volume, consisting of seven episodes,[3] which premiered on Netflix on May 27, 2022, and the second volume, consisting of two episodes,[3] scheduled to release five weeks later on July 1, 2022.[4]

The fourth season takes place in March 1986, eight months after the Battle of Starcourt that concluded the previous season. Notably, the season follows several storylines across a range of locations, including Hawkins, California, Nevada, Alaska and Russia.

It's been eight months since The Battle of Starcourt, which brought terror and destruction to Hawkins. Struggling with the aftermath, our group of friends are separated for the first time - and navigating the complexities of high school hasn't made things easier. In this most vulnerable time, a new and horrifying supernatural threat surfaces, presenting a gruesome mystery, that if solved, might finally put an end to the horrors of the Upside Down.[5]

Following the release of Season 3, the Duffer Brothers stated that should Stranger Things get a renewal for the fourth season (renewal was confirmed two months later), the season would be very different and would explore newer locations outside Hawkins in order to "open up plot-lines". They also confirmed the season would address the mid-credits scene of the finale of the third season.

In early February 2020, it was reported that the season's length had been extended to nine episodes. [18] In mid-February, in addition to releasing a teaser trailer, the Duffers revealed the return of Jim Hopper who's now imprisoned in Kamchatka, likely confirming that he was the American prisoner discussed in the end credit scene of season 3. They added that the season would be the "most frightening yet" with "a new horror" emerging that would connect everything.[19]

In an appearance at Liverpool Comic Con, actor David Harbour teased that Hopper's backstory will be explored in the upcoming season.[20] Actor Joe Keery stated that the fourth season would be "a lot scarier" than previous seasons. Actress Sadie Sink also mentioned that the teens will be entering high school during the season. In mid-August, the Duffer brothers confirmed that all of the scripts have already been completed and were just being adjusted. [21]

For the fourth season, both Priah Ferguson[22] and Brett Gelman[23] were upped to series regulars.

On July 1, 2020, it was announced that Joel Stoffer had been cast in an undisclosed role.

On June 9, 2021, it was officially announced that Amybeth McNulty, Myles Truitt, Regina Ting Chen, and Grace Van Dien had joined the cast for the fourth season. [25]

According to a report made by TV Line, Season 4 was slated to begin filming in January 2020. And following the release of a teaser on February 14, the Duffer brothers confirmed that filming for the fourth season had already begun.

According to a listing in Production Weekly, the season was being filmed under the working title "Tareco", which is actually a type of Brazilian biscuit.[26] Shooting took place in Vilnius, Lithuania and later moved back to Atlanta, before filming came to a halt due to COVID-19 outbreak. According to stunt co-ordinator Hiro Koda, two episodes of the season were filmed before production was halted. [27]

On October 1, 2020, it was officially confirmed that filming for the fourth season has resumed again.[28] On the occasion of Stranger Things Day, photos of Gaten Matarazzo, Joe Keery, Sadie Sink and Caleb McLaughlin during filming takes were released on November 6. [29]

As of, August 1st 2021, production for this season is close to being finished with at least a month or two left and the release date soon to come out.[30]

Shawn Levy has revealed that,"by the time Free Guy comes out, August 13th, part of that answer will be known." Meaning we will have some what of an answer of when the release date is.[31]

Following the outbreak of the pandemic COVID-19, Netflix decided to halt production on all its films and TV series, including the fourth season of Stranger Things on March 13, 2020, for at least two weeks.[32] However, filming for the season resumed at the end of September 2020, 6 months since production came to a halt.

On February 17, 2022, five posters of multiple characters were showcased on the Stranger Things Instagram page. Among these posters, there was a final poster with all of them combined announcing that Vol. 1 would be released on May 27, 2022 and Vol. 2 would follow and release on July 1, 2022.

On March 23, a day after Will Byers' birthday, twelve different stills were posted on the Stranger Things Instagram page, showing multiple characters, old and new.

On April 20, 2022, the magazine company SFX released three different magazines showcasing the Party along with Nancy Wheeler, Robin Buckley and Steve Harrington. Inside, the magazines had multiple behind the scenes photos as well as never-before seen photos of the Hawkins crew and California crew.

On April 27, 2022, a poster of Eleven was released, showcasing her shaved head, hospital gown and Hawkins Lab at the bottom of the poster.

On May 2, 2022, personal posters for Jim Hopper, Joyce Byers and Murray Bauman were released, with a Russian base at the bottom of the poster.

On May 5, 2022, personal posters for Mike Wheeler, Will Byers, Jonathan Byers and Argyle were released, showcasing California and the current Byers residence beneath.

On May 9, 2022, personal posters for Max Mayfield, Lucas Sinclair, Dustin Henderson, Steve Harrington, Robin Buckley, Erica Sinclair, Nancy Wheeler, Karen Wheeler and Eddie Munson were released, showcasing the Hawkins crew (Max & Lucas), the Scoops Troop (Dustin, Steve, Robin & Erica), the Wheelers (Nancy & Karen), and the Hellfire Club (Eddie). All of the posters have the Creel House at the bottom, showing the connection to all the characters.

On May 14, 2022, following Millie Bobby Brown's appearance on Jimmy Fallon, four photos were taken from a teaser showing, Will Byers, Eleven, Angela, Jake and a few of their friends tormenting El.

On May 18, 2022, the website IGN released four stills of Hopper and Yuri at the Kamchatka base in Russia, and then Max Mayfield and Dustin Henderson at Family Video, Dustin, Eddie Munson and Mike Wheeler in the Hawkins High cafeteria, showcasing their Hellfire Club shirts and Steve Harrington with Max and Dustin investigating something in Hawkins.

On May 21, 2022, during Seven Stranger Days, one still and 12 behind the scenes photos were released, showcasing the Erica with the Hellfire Club, Hawkins High tigers at the basketball game and multiple characters and the crew behind Stranger Things.

The first teaser trailer was released on September 30, 2019, alongside the season's official announcement.

A clip from the fourth season was released on February 14, 2020, which confirmed the fate of Jim Hopper. Another teaser trailer showing the Season 4 table read was released on March 3, 2020.

On May 6, 2021, a teaser trailer was released that teased multiple test subjects of Hawkins National Laboratory.

On August 6th, 2021, a sneak peek was dropped that teased multiple shots of the season. It also teased that it will be dropping in 2022, but the release date was not specified.

A third teaser trailer was released on September 25th, 2021, that showcases the house that was previously owned by the Creel family.

On April 11, 2022, the official Stranger Things Youtube and Twitter account posted a countdown for the season 4 trailer, which dropped on April 12, 2022 at 10 A.M. EST and showcased the Upside Down, the Creel House, and new creatures from the Upside Down.

On May 14, 2022, during Millie Bobby Brown's appearance on Jimmy Fallon, a clip from "The Hellfire Club" was shown, showcasing, Angela, Jake and their friends tormenting Eleven in the school courtyard. In the clip, the bullies knock over El's backpack and stomp on her project of Hopper, while Will Byers stands, watching them from afar. El calls out Angela and tries to use her powers, but she fails and is confronted with a courtyard of laughing kids.

On May 17, 2022, during Sadie Sink's appearance on GMA3, a clip from "The Hellfire Club" was shown with Ms. Kelly talking to Max. In the clip, Ms. Kelly asks Max about her mother, who had picked up a drinking habit, following Neil Hargrove abandoning the latter because of Billy's death. Thought Max says things are better without Neil, she explains to Ms. Kelly that her mom now is juggling two jobs, to which Ms. Kelly asks Max if she's still having nightmares or headaches and she says no.

On May 22, 2022, the final trailer for Vol. 1 dropped showcasing Max and Nancy in Vecna's world, Robin, Nancy and Steve in the Upside Down, the Hellfire Club at a campaign and much much more.

On May 25, 2022, during Gaten Matarazzo's appearance on Live with Kelly & Ryan, a clip was shown with the Scoops Troop (excluding Erica) and Max. In the clip, Max and Dustin rush into Family Video and ask Steve and Robin how many phones they have in store. Robin states three, and Max tells Dustin that the store would be good to "set up shop." Due to the newfound dead body in Hawkins, they use the computer to find the phone numbers of Eddie's friends.

On the same day, the official Stranger Things accounts posted a 7 second clip, from "The Monster and the Superhero", of Argyle, Jonathan, Will and El. In the clip, the four were waiting at the Lenora Hills Airport for Mike, who was coming from Hawkins for spring break.

hawkins, do you copy?

hawkins, do you copy?

wheelers, do you copy?

wheelers, do you copy?

hellfire, do you copy?

Title card of California, the new region in Season 4

I Am Hells Master 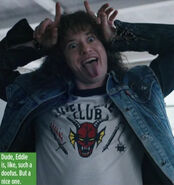 Behind the Scenes with Noah Schnapp

Mike Duffer wants to be part of the game

Flashback or is Eleven in the Past?

Millie showing off her skills on the rink

(From a Magazine) Sadie, Caleb and Gaten 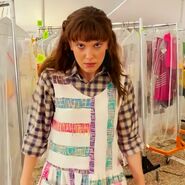 From Millie to Eleven 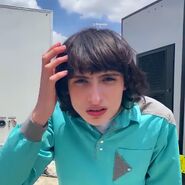 From Finn to Mike 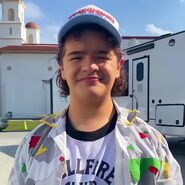 From Gaten to Dustin 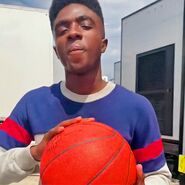 From Caleb to Lucas 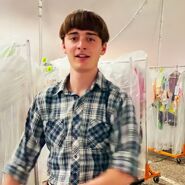 From Noah to Will 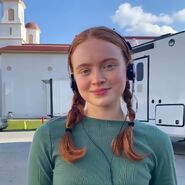 From Sadie to Max

Robin, Nancy, Dustin and Steve are nothing short of a dream team.

Hawkins High’s team spirit is surprisingly intact despite all the supernatural happenings.

While Lucas may be on the basketball team, that doesn’t mean he has everything figured out. 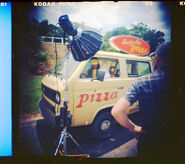 Here’s Argyle behind the wheel of his pizza delivery van.

What would a season of Stranger Things be without a collection of retro bicycles?

Don’t expect to see Chief Hopper behind the wheel of one of these any time soon, because he’s trapped in Russia when Season 4 begins.

We assume Steve will be just as protective of his car this season as he’s been known to be previously. Back off, Max.

Meet some of the crew who make the supernatural action possible.