Lonnie Byers, portrayed by Ross Partridge, is a recurring antagonist in the first season of Stranger Things.

Lonnie Byers was born sometimes in the late 1930s/1940s, most likely born and raised in Hawkins. It's possible he attended school alongside Joyce Byers, which explains how they met. Sometime during the 1960s, Lonnie and Joyce married and had their first son named Jonathan. Jonathan mentions that Joyce and Lonnie did at one point love one another, but he wasn't present for it, meaning their marriage became a problem from a start. On March 22, 1971, their second son Will Byers was born. Though Will was close to Joyce and Jonathan, Lonnie was extremely unsupportive of his son's love for video games, drawing, and Dungeons & Dragons, calling him a queer and a fag. It is implied that Lonnie may have been unfaithful or even physically abusive to Joyce during their marriage, though the details of that era have not yet been explored on the show. For Jonathan's 10th birthday, around 1977, Lonnie made him go hunting with him and forced his son to kill a rabbit, making Jonathan cry for a week. Due to Lonnie's negligence as a parent, Jonathan stepped in as a father figure to Will. The day Lonnie left, the brothers built a fort for Will out in the woods by the house named Castle Byers. By 1982, Lonnie was living in Indianapolis. He began dating Cynthia.

When Will went missing, Joyce called Lonnie multiple times, not because she believed in the possibility of Will being with him, but because Chief Jim Hopper did. He never answered his phone, but his girlfriend did, and she hung up on Joyce once she realized she was his ex-wife.

Jonathan then went to Lonnie's house to look for Will. Lonnie did not care that Will was missing and blamed Joyce.

After a body believed to be Will's was found in a quarry, Lonnie came to Joyce's house and planned to sleep on her couch for a few days; Joyce believed he was there for Will's funeral. Joyce later discovered that Lonnie only came to make money from Sattler, the company that owned the quarry where it was believed Will drowned. Joyce then violently threatened him and threw him out of her house.

Lonnie is an outright despicable man, nothing short of a sleaze. He's a drunkard, uncouth, and a complete slob. He's extremely selfish, egotistical, abusive and is virtually devoid of redeeming qualities save for coming to his ex-wife's "rescue" when she needed him and trying to talk her down from what seemed crazy due to having Christmas lights around her house and smashing a hole in her wall as well as telling his son to take a poster down because it was inappropriate, unfortunately, this was not the case as he merely came to exploit Will's "death" as a means to make money from Sattler the company that owned the quarry proving he has no love and respect for his ex-wife Joyce, and has even less for his two sons, viewing his sensitive youngest son Will as weak and a waste. He's quite aware of how much his family hates him and is more than willing to spite them. 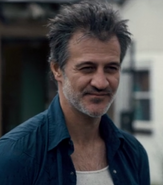