watch 03:19
Wiki Targeted (Games)
Do you like this video?
Play Sound

Holly is the younger sister of Nancy and Mike Wheeler and the daughter of Karen and Ted Wheeler.

Holly was the youngest child of Ted and Karen Wheeler and the younger sister of Mike and Nancy. She was born around 1980.

On November 7, 1983, the Wheeler family had a family dinner where Mike and Nancy got into a loud, verbal fight, startling and scaring Holly. Karen became angry with Ted and left the table, taking Holly.

Two days later, Holly and her mother visited Joyce Byers. Holly followed Joyce's flickering Christmas lights to Will's room and saw the monster begin to push through the wallpaper. Joyce asked Holly if she saw anything, and Holly responded with a yes. Joyce then insisted for the two of them to leave.

Three days later, Ted, Karen and Holly were placed under house arrest while agents from the Department of Energy searched their home.

One month later, after Will's rescue from the Upside Down, Holly is seen with her family celebrating Christmas together.

On October 29, 1984, Holly Wheeler was with her parents in the kitchen watching Nancy chase Mike for taking money from her piggy bank so he could play at the Palace Arcade with his friends. The next day, Holly is eating at the dinner table as her parents tell Mike to fill two boxes of his toys for a yard sale.

Four days later, while eating breakfast with her family, Holly is asked by Mike if she likes the grapes she's eating. She then listens to Nancy asking if she could spend the night at a friend's house which her mother says yes (unaware that Nancy plans to expose Hawkins Lab with the help of Jonathan Byers to Murray Bauman as payback for causing the death of her best friend, Barbara Holland.).

In 1985, a couple of days before July 4, Karen decided to meet Billy Hargrove for swim lessons at a local motel. However, when she saw Holly sleeping on her father's lap as he slept on his couch, Karen changed her mind as seeing her youngest daughter and her husband caused Karen to realize how she's missing out on her family by being seduced by Billy.

On the Fourth of July, at the Fun Fair, Holly was with her parents, having fun as they were about to go on the Ferris wheel. When they reached the top of the wheel and stopped, Holly and her parents got a perfect view of the fireworks. Holly noticed some trees in the distance moving and tried to tell her mother, but Karen urged her to keep watching the fireworks.

Later, as Holly got on the Gravitron with her parents, Holly watched as her mother was approached by Joyce Byers and Jim Hopper, asking where Mike, Nancy, and their friends are. Holly enjoyed the Gravitron as it started and watched as Joyce and Hopper ran off, listening to her parents remark how Joyce and Hopper make an odd couple, which unknown to the three of them, the two were pursued by Russians led by hitman Grigori.

Holly is an adorable and innocent little girl. Despite being very quiet throughout the series, Lucas claims she says more after he observes Eleven's limited vocabulary when the boys first meet her. Like her parents, she's largely unaware of the events that take place in the town of Hawkins that her siblings are involved in, though there have been many instances where she does notice the supernatural, only to get shut down due to her young age. She noticed Joyce's Christmas lights flickering leading to Will's bedroom and the Demogorgon attempting to go through the wall, but only Joyce (who experienced the same situation the night prior) believes her when Holly explains it to her and Karen. She also notices the Mind Flayer moving through the trees at the top of the Ferris Wheel during the Fourth of July celebration, but Karen, unaware, merely tells her to look at the fireworks. Despite this, Holly can also get scared, especially when her brother and older sister were arguing over Will and Steve Harrington, Holly was very scared as their outbursts frightened her.

Like Nancy and Mike, Karen deeply loves Holly. She is often seen being more responsible for Holly than Ted (such as comforting her, putting her to bed, holding her, and feeding her), due to his laidback personality. When Nancy and Mike argue and storm off from the dinner table, Karen comforts a scared Holly by distracting her with her dinner. In 1985 Karen restrains herself from having an affair with Billy after noticing Ted sleeping in his recliner with Holly, realizing she's putting her needs before her family. She and Ted take her to the Fourth of July Fun Fair, where they watch the fireworks on top of the Ferris Wheel.

Similar to Nancy and Mike, Ted is less than involved in Holly's life, as Karen is seen often taking care of her more than him. Despite this, he does love her and it's likely he has a better relationship with her than his other two children, most likely due to her young age. In 1985, Karen watches Ted sleep with Holly on his lap in his recliner. During the Fun Fair on the Fourth of July, she and Karen jokingly tease Ted about torturing him by forcing him to get on the Ferris Wheel with them. The three then watch the fireworks at the top of the wheel.

Due to Nancy both having a significant age gap from Holly and her being involved in the supernatural occurrences in the town of Hawkins (along with their brother), Nancy and Holly rarely have interactions with one another. However, she does indeed care about her. When Will went missing, which caused their parents to forbid them going out after dark, Nancy doesn't appear to care about swearing and raising her voice in front of Holly. When seeing her house being searched by the agents of Hawkins lab, Nancy is concerned for her family. In 1984, she is shown offering food to her at the breakfast table.

Due to Mike both having a significant age gap from Holly and him being involved in the supernatural occurrences in the town of Hawkins (along with their sister), Mike and Holly rarely have interactions with one another. However, he does indeed care about her. After Will went missing , Mike doesn't appear to care about swearing and raising his voice in front of Holly. He shows a picture of her to Eleven while they tour the house. In 1984, he is seen asking how her grapes are while the family eats breakfast. 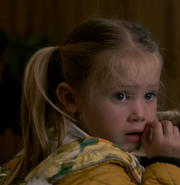 Retrieved from "https://strangerthings.fandom.com/wiki/Holly_Wheeler?oldid=56149"
Community content is available under CC-BY-SA unless otherwise noted.