Heather Holloway was a recurring character, and later an antagonist, in the third season of Stranger Things. She was a lifeguard at the Hawkins Community Pool and a co-worker of Billy Hargrove.

During the summer of 1985, Heather became a member of the Flayed after being kidnapped by a possessed Billy. She helped Billy flay more people (including her parents) until her death at the hands of the Mind Flayer.

Heather Holloway was the daughter of Tom and Janet Holloway. Born in 1967, she was presumably raised in Hawkins, Indiana for most of her life. During the summer of 1985, Heather became a lifeguard at the Hawkins Community Pool where she became co-workers with Billy Hargrove.

At the Hawkins Community Pool, Karen Wheeler and her friends would eagerly wait for Heather's shift as lifeguard to be over, as after her came Billy, who was extremely attractive towards the women at the pool.

During one of her shifts, she finds Billy acting strange and goes to check on him. This proves to be a bad idea as Billy abducts her and brings her to the Mind Flayer, where she is converted into one of the Flayed. Her conversion is also heard by Eleven when she is spying on Billy, but she does not see Heather or the Mind Flayer.

Eleven uses her powers to track down Heather after they figure out she's missing, and find her in a tub of ice, with Heather popping out begging for help, jump scaring Eleven and then falling through the floor in the Void.

When Max and Eleven go to Heather's house, they find Billy with her parents Tom Holloway and Janet Holloway. Heather comes out of the kitchen offering Eleven and Max a cookie, which they refuse and then leave. Janet later doesn't feel so good, spills her wine, and goes to lie down, only to fall to the floor unconscious because of Billy and Heather poisoning the drinks. When Tom goes to check on her, Heather picks up an empty bottle and knocks him out with it. They then (as seen in a flashback) drag them to the garage, restrain them, and take them to the Mind Flayer, where they are then converted into the Flayed.

She is next seen tending to Billy's injuries after his fight with Eleven, with Billy commenting on how Eleven, Max, Mike, Will, and Lucas know that he's Flayed. Heather responds that they don't know about the rest of us, with the shot panning out to show more members of the Flayed.

Later, the Party figures out that the Mind Flayer has control over more people (thus dubbing them as "Flayed"), realizing that Heather is amongst those people.

A year after Heather's death, she was one of the few people mentioned by Jason Carver during his speech before a basketball game at Hawkins High School. He listed her as one of the individuals killed in the fire of Starcourt Mall.

Heather is a sweet and sensitive neutral girl who hangs out with and works alongside Billy as a lifeguard at the Hawkins Community Pool. She seems to be both sympathetic towards and harbor some degree of feelings for Billy, prior to her abduction by him, as evidenced by both her flirtatious remarks towards him while walking past him during their shift switches, as well as her concern for his mental state while he was hallucinating due to his implantation by the Mind Flayer.

After her abduction by Billy and conversion into one of the Flayed, Billy and Heather seemed to begin a romantic relationship, though this was likely a sham for the sake of the Hive Mind. Meanwhile, her personality became very one note and almost like an exaggerated version of her prior personality. She quickly became completely subservient to the will of the Mind Flayer, leading to the development of sociopathic tendencies as evidenced by the remorseless assault, abduction, and conversion of her parents by herself and Billy.

By the end of her life, she became totally devoted to the cause of The Flayed, which ultimately led to her death.

Heather gained these abilities after becoming the Flayed.

Her character was revealed in 2018 where Heather was described to be "a lifeguard at the community pool who becomes the centerpiece of a dark mystery."

Heather at the pool.

Heather working at her lifeguard shift.

Heather moments before getting Flayed. 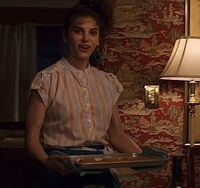 A now Flayed and more muscular Heather arrives at the dinner carrying a plate of Cookies.

A flayed Heather stares at Eleven and Max.

A flayed Heather asks Billy if everything’s alright after he returned.

A flayed Heather asks Janet if she’s ok after she and Billy poisoned the food.

A Flayed Heather being activated.

Heather looks down at her father after knocking him with a bottle.

Heather at the steelworks with Tom moments before he is flayed.

Heather and Billy looking at the Spider Monster.

A flayed Heather at the Brimborn Steel Works with Billy.

Heather and Janet are summoned by the Mind Flayer.

Heather walks down the stairs of the steelworkstowards the Mind Flayer. 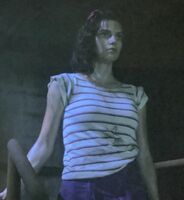 Heather reveals herself to the The Mind Flayer .

Heather stares at The Mind Flayer before she’s melted. 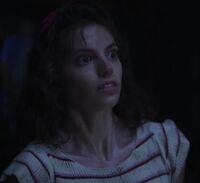 Heather before she melts and merges with The Spider Monster (no melting marks).

Heather walks towards the Mind Flayer before she’s melted.

Heather melts after being summoned by the Mind Flayer.