Student at Hawkins High School
Leader of the Hellfire Club

Edward "Eddie" Munson, portrayed by Joseph Quinn[3], was a main character in Stranger Things, being introduced in the fourth season. He was the leader of the Hellfire Club, the official D&D club of Hawkins High School, and an electric guitar player in his band Corroded Coffin.

Eddie was a full-on nonconformist metalhead. He was hated by those who don't understand him, but loved by those who did.[4] Eddie enjoyed playing Dungeons & Dragons with his friends and has considerable knowledge on the game. He was the head of the Hellfire Club. Because of his devotion to Dungeons & Dragons, Eddie refused to cancel any campaigns and would force the members of his club to seek out new substitutes to play if a member of the club was unable to attend on any particular evening.

Eddie struggled in school, likely due to his eccentric personality rather than low intelligence, and was implied to have bad grades in his classes. In spite of this, Eddie was still determined to graduate by 1986. He had a knowledge on drug use, for which he was sought out for, but could be friendly enough to offer a discount.

Eddie was also noted to harbor a dislike towards popular groups, such as the Hawkins High basketball team and its captain, Jason Carver. Despite this, Eddie was very kind towards Chrissy Cunningham, a popular cheerleader and Jason's girlfriend; implying he was fundamentally a good-hearted person and was likely responding to the demonization of his favorite game. Additionally, it's seen he was quick to frustration and irritation, but for the most part, could get along with those outside his immediate group of friends.

He was shown to have a passion for music ever since he had begun playing the guitar, recognizing and making rock and metal references that others didn’t understand, such as to Steve Harrington. His references are often used to figure out the situations around him. Eddie expressed his passions through his style and room.

Eddie was very cowardly as he was extremely horrified when Chrissy and Patrick McKinney were killed by Vecna, causing him to run away and become a suspect in their murders. However, when those closest to him are in danger, Eddie was willing to come to their rescue and upon realizing the Demobats would enter the real world if he entered through the gate in his trailer, Eddie sacrificed himself to draw them away and made Dustin Henderson to look after any more outcasts at Hawkins High School before dying in Dustin's arms.

Little is known of their dynamic. Despite his unruliness, Wayne does not believe Eddie was capable of any of the killings and believes that his nephew is a good kid. He knows people think Eddie is a freak, but cares deeply for his nephew and states it is not in Eddie's nature to commit murder. While Eddie is above the age of 18, it is presumed that Wayne had been Eddie's legal guardian. Eddie states his uncle works long hours at "the plant" in order to provide for their meager household but does not specify the nature of this job.

Eddie first met Chrissy in middle school during one of his band performances. Over time, Chrissy forgot about him as she became more popular socially, but Eddie still remembered her as they started attending Hawkins High School in 1986. On March 21, Eddie met up with Chrissy in the woods and offered to sell her some drugs. However, as Chrissy was experiencing shock from her recent frightening visions, Eddie became apprehensive and was about to leave before Chrissy asked him if he had ever felt as if he was “losing his mind.” to which Eddie jokingly replied, “on a daily basis.” He then joked that he hadn’t expected Chrissy, the "queen of Hawkins High", to do a drug deal with him. He and Chrissy talked about how they had hung out before and laughed together like good friends. In the end, he gave her a discount on the drugs he was selling to her and when she asked if he had anything stronger than that to ease her mind, Eddie was quick to say he did.

After finishing a Dungeons & Dragons campaign with his friends, Eddie took Chrissy to his home to give her the drug she asked for. However, after Eddie found the drug, he became concerned for Chrissy when he saw her standing in a catatonic state. Eddie then watched in horror as Chrissy levitated in the air and was brutally murdered. Afterwards, Eddie became traumatized over Chrissy's death and guilty for not having been able to help her.

Both Jason and Eddie have had what seems to be a long rivalry. The two have a strong disliking of each other, especially now in senior year due to differing social cliques, alongside Jason's almost cult-like mindset with his basketball team.

Jason and Eddie, as of what is known currently, started out with a boiling hatred of Eddie's extroverted behavior where, in the lunchroom, Eddie called out multiple social groups and began to compare them before slowly flipping Jason off. Later on, Jason referred to Eddie multiple times as a freak and Satanist, due to his involvement in the Hellfire Club. Jason then became even more obsessed with Eddie once he discovered Chrissy was murdered in Eddie's trailer. Jason then gathered his basketball team in order to hunt Eddie down, and they eventually did (in Chapter 5). Eddie and Jason engaged in a borderline fight, where Jason followed Eddie out onto the water with his teammate, Patrick McKinney. The two didn't exchange words but the situation had a silent tension of hatred, primarily with Jason. Once Jason witnessed Patrick die, he still believed that it was Eddie's doing, and blamed D&D for his connection to Satan, genuinely believing that Eddie had supernatural powers. After this, they parted, but Jason was still hellbent on finding him, and instructed the entire town to hunt down Eddie and the Hellfire Club members.

The two had no clue of each other's existence when Dustin was in middle school, but as soon as Dustin joined high school, Eddie had been looking for new members of the Hellfire club, which conveniently led him to Dustin. Dustin had been sitting with Mike at a lunch table when Eddie first spotted him and plucked him from the crowd, alongside Mike, essentially adopting them for his duration of his senior year. Eddie quickly took to Dustin, and somewhat replaced Steve from his role as Dustin's "babysitter," due to the fact he took a somewhat parental role for Dustin, protecting him in Hawkins High.

Similarly to Dustin, he was taken in by Eddie at the start of his freshman year in Hawkins High. The two didn't have as much as a close bond that Dustin does, but Eddie did mention that he saw Mike and Dustin as potential for the future game-masters of Hellfire Club. Otherwise, not much was mentioned on how close they are, especially due to Mike being in California with his girlfriend over spring break.

Eddie and Erica first have a standoffish vibe towards each-other, especially at the end of semester campaign, where Eddie mentions Erica's infamy amongst the group due to Lucas most likely whining about her- but after some time the two warm up to each other. Eddie is surprised by her skill for D&D, and especially her luck with her D20 rolls, as she wins alongside her brother for the night. The two don't talk too much after, besides his congratulations to her, but she does still point out Lucas, Max, and Dustin lying to the cops and their parents for him, so it doesn't say that they established much of a friendship until the story is explained to her and she helps the group save him, Nancy, Robin and Steve.

Eddie also has a standoffish vibe with Steve, primarily due to the tension of them both being protective parental figures to Dustin. The two have slight moments of clashing, mainly when Steve shows an impatience for Eddie gathering things, and even when Eddie throws his jean jacket at Steve so Nancy and Steve will stop flirting.

After some time, the two have a somber exchange where the two explain the conflicting feelings of anger for each-other. Both were threatened by the other, due to the fact that Dustin spoke highly of both of them to the other, which made the other worried if they are being replaced. Eddie even goes to compliment Steve, saying he is like "Ozzy Osbourne," due to his killing of a Demobat. Eddie also points out the care that Nancy and Robin have for Steve, saying that Steve should go for Nancy if anything.

While Eddie was initially annoyed by Lucas prioritizing his basketball commitments over those to the Hellfire Club, Lucas considered Eddie a friend and vouched for his and Hellfire’s character when they were labeled Satanists. When he learned that Jason Carver had plans to lead a vigilante posse against Eddie, Lucas - knowing of Eddie’s innocence - regrouped with Dustin, Max, Steve, Nancy, and Robin to aide a fugitive Eddie.

Eddie to The Hellfire Club:

Eddie to Dustin and Mike:

His character was first revealed on November 20, 2020 via the show's official social media accounts along with several other new characters.[3] In December of 2020, Joseph Quinn was spotted filming in a forest in Atlanta alongside Maya Hawke (Robin Buckley) and Joe Keery (Steve Harrington).[5] 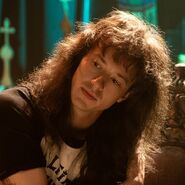 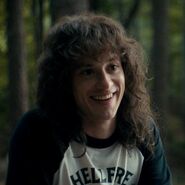