View source
watch 01:07
How Dungeons & Dragons is Used in "Stranger Things"
Do you like this video?
Play Sound

TSR, Wizards of the Coast

1974 (original)
1981 (D&D Expert Set)
Dungeons & Dragons is a fantasy tabletop role-playing game first published in 1974. It is a popular activity with Mike, Lucas, Will, and Dustin, who play the 1983 Expert edition of the game in Mike's basement. They use the game's elements and monsters to describe and explain the otherwise unknown forces that plague Hawkins.

Mike, Lucas, Dustin, and Will played Dungeons & Dragons from at least 1979 onward, according to Mike. They played their "Elder Tree" campaign in 1979, for which Mike's sister Nancy dressed up as an elf.

The four ran a ten-hour campaign on November 6th 1983, using Basic D&D from about 10am to 8pm. Mike, acting as Dungeon Master, summoned an army of troglodytes before continuing to summon the Demogorgon, the Prince of Demons. Will was urged by Lucas to "fireball" and attack it while Dustin advised him to cast a protection spell. Will attempted to fireball it, but he only rolled a seven when he needed a thirteen or higher. This meant Will's character was defeated by the Demogorgon. In an eerie coincidence, Will was abducted by a monster---the actual Demogorgon---in real life shortly after the campaign ended.[1]

Later, Eleven flipped the game board upside-down to explain that Will was trapped in an alternate dimension, which they later dubbed the Upside Down. Dustin compared the Upside Down to the Vale of Shadows from the game: "a dimension that is a dark reflection, or echo, of our world. It is a place of decay and death, a plane out of phase, a place of monsters. It is right next to you and you do not even see it." She used the Demogorgon figurine to explain that the monster was present within the Upside Down like Will was.

After Will's return, the boys ran another campaign on Christmas Eve which seems to have been Advanced D&D. In the story, the characters encountered a "lost knight", a "proud princess" and "weird flowers in a cave". Eventually, Mike summoned the fearsome Thessalhydra, but this time Will triumphed over the enemy, fireballing the beast with success. Lucas's Knight cut off the beast's seven heads, with Dustin's Dwarf storing them in his bag of holding. Mike wrapped up the campaign with a medal ceremony, in which "King Tristan" thanked the heroes for their bravery and service. However, the boys complained that the campaign was "way too short" and that Mike had failed to tie up the story in a satisfying way.[2]

In 1984, Dustin used the concept of the "Mind Flayer" in order to explain the role and traits of a creature that controls the Upside Down and invades Hawkins.

In 1985, with the presence of Max and Eleven, and Dustin having met Suzie, the boys's interest in D&D was diminished much to Will's dismay who remained single. At several times he tried to organize sessions or attract their interest to the game, to no avail.

"The Cult of Vecna" was the name of a D&D campaign that Eddie Munson put on for the Hellfire Club in 1986. Vecna, the main villain of the campaign, would become the nickname for yet another threat hailing from the Upside Down.

The Dungeon Master is the organizer of the adventure who supervises all aspects of the game, excluding the actions of the player characters. However, the DM is not considered a character class in the game.

As the DM, Mike often narrated the adventures' scenarios while also resolved the outcomes of every events, for instance, the demise of the Thessalhydra. Besides, he also would resolve internal conflicts between the party members.[5]

A magic user can cast both offensive and defensive spells, either to attack foes or defend the party from dangerous situations. A high level magic user is called a wizard.

A fighter battles using skills, strategy and tactics. They are strong in defense.

Dwarf is a short humanoid who is resistant to poison and magic and can also see in the dark. In basic D&D dwarves, were treatedas a class, who were strong and skillful fighters

Paladins are holy knights and divine spell-casters with the most restricted codes of conduct. A paladin is highly devoted to embody honor and sense of duty.

Cleric is a powerful healer who is capable in combat and skilled in the use of divine magic.

Ranger is a hunter and skilled woodman. A ranger has the ability to recruit various woodland animals, mythical creatures and can also dual-wield weapons.

Bards are spellcasters who have already gained experience as fighters and thieves and are effective in inducing magical effects by using their artistic talents.

Zoomer is not a class in D&D. A zoomer would have the ability to make super powered attacks by attacking at high speed.

The Demogorgon was a powerful demonic monster, famous for being one of the toughest foes in the game. Mike used it as an antagonist in one of the campaigns he ran. Will tried to cast "Fireball" against it, but he only rolled a seven, resulting in the Demogorgon defeating his character.

Mike has a miniature of Demogorgon, which shows the demon's form: it is huge, with a reptilian body, two Mandril heads, a forked, whip-like tail, and arms ending in long tentacles.

When Mike, Dustin and Lucas learned from Eleven about the existence of a real-life monster from another dimension, they called it the Demogorgon.

When another mysterious monster from the Upside Down emerged as a threat to Hawkins, Dustin and his friends used another Dungeons & Dragons-based analogy to help explain and describe their situation. Dustin equated the new monster with the Mind Flayer, an evil and sadistic being from the Underdark, a series of twisting underground caverns in D&D.[6] Dustin gave this description of the Mind Flayer:

It's a monster from an unknown dimension. It's so ancient that it doesn't even know its true home. It enslaves races of other dimensions by taking over their brains using its highly-developed psionic powers.

When asked about the Mind Flayer's motivations, Dustin gave this reply:

It views other races, like us, as inferior to itself. It wants to spread, take over other dimensions. 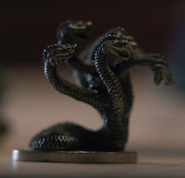 This section contains speculation. The information provided should not be viewed as official unless confirmed by official sources.

The final campaign in "The Upside Down" can be interpreted as a comment on the length and unresolved story lines of the first season; the boys complain that the campaign was too short, questioning "What about the lost knight? And the proud princess? And those weird flowers in the cave?"

There were different interpretations among fans of what each element refers to; the "lost knight" was thought to refer to either Hopper or Eleven while the "proud princess" refers to either Eleven or Nancy.

The weird flowers in the cave were thought to refer to the Demogorgon, as well as eggs present in the Upside Down.

Season Two revealed a slightly different meaning behind this foreshadowing. The “lost knight” may speak to the death (loss) of Bob, the only death of a main character during Season Two. The Duffer Brothers have stated that The Goonies provided insperation for the feel of Stranger Things. The derivation of Sean Astin‘s iconic character name Mikey is Michael, patron saint of solders. Additionally, he demonstrated the chivalric traits of loyalty, generosity, and honor prior to his sacrifice in saving his friends.

The “proud princess” , a almost invincible character[7] may refer to Max. Maxine is the feminine form of Maximilian, an often used name of royalty within The Holy Roman Empire. Max’s eventual overcoming of Billy towards the beginning of “The Gate,” and her fulfillment of being the party’s “zoomer” could have reasonably provided her with a sense of pride.

The phrase “ weird flowers" alludes to the strange appearance of the "demo-dogs", while the "cave" most likely refers to the tunnels beneath Hawkins. Another interpretation may be the unique appearance of the biological atmospheric generator (spore clusters) that produced the particulate matter (spores) distinctive of the Upside Down. These “weird flowers,” which grew directly out of the Vines were central to Hopper’s capture in “Dig Dug” and provided comic relief at Dustin’s expense in “The Gate.”

The first season's monster is nicknamed after the Demogorgon, which in Dungeons & Dragons mythology has two heads, each with their own mind that strives to kill the other, but they are unable to do so since they are connected to one another. This lends support to a popular theory among fans that Eleven and the Demogorgon are in some way connected.

Many fans also believed the Thessalhydra's appearance in the final campaign was a setup for Season Two. Since the Demogorgon's appearance in the first campaign foreshadowed the monster and the role it would play in Season One, it was thought that the Thessalhydra could similarly hint towards other monsters from the Upside Down. This was accurate speculation, but only to a degree. Although another monster was indeed introduced the following season, the boys referred to it in D&D terms as the Mind Flayer, rather than the Thessalhydra.