View source
watch 01:05
What are Demogorgons?
Do you like this video?
Play Sound

The Upside Down
The Hawkins tunnel system

Demogorgons are predatory creatures originating from the Upside Down. All Demogorgons encountered thus far are assumed to obey the Mind Flayer, and make up part of his hive mind. Under his influence, Demogorgons are murderous, violent and have limited intelligence.

In 1983, a fully grown Demogorgon set foot in Hawkins, Indiana after a gateway to the Upside Down was accidentally opened. This Demogorgon was eventually defeated and destroyed, but not before it could inflict damage upon the human world. Will Byers, a rescued victim of the Demogorgon, became a vessel for the Mind Flayer. Somehow, Will's possession allowed the Mind Flayer to unleash a swarm of adolescent Demogorgons upon Hawkins.

Demogorgons have not been given an official name or scientific title. However, Eleven and her friends used the nickname "Demogorgon" in reference to the original monster from 1983, after a monster featured in Dungeons & Dragons.

The life cycle of a Demogorgon seems to have six distinct stages and is similar in some ways to that of several Earth amphibian species.

In the only cases of Demogorgon reproduction observed, the cycle began with the deposition of eggs or larvae within a host by a tentacle within the Upside Down. The slug-like larvae later were vomited up by the host, and subsequently escaped into the wild. After this, the larvae underwent a period of rapid metamorphosis, molting through each phase of their development until emerging as an adult. The process takes place over the span of a week. A Demogorgon's life cycle was best illustrated by Dart, a Demogorgon which Dustin temporarily kept as a pet.

The growth of a Demogorgon highly depends on the amount of both food and nutrition it consumes. It took D'Artagnan more than 9 months to grow and transform from Slug form to Pollywog in the wild. However, after being kept and fed by Dustin, it could achieved the Demodog phase in only 2-3 days.

The larvae inhabited the bodies of the original Demogorgon's victims:

After an unknown amount of time, a larval Demogorgon would molt to the next stage of its life cycle, sometimes referred to as a “pollywog” due to the resemblance to the larval stage of amphibians. The pollywogs are small enough to fit in the palm of a hand, and their translucent skin is colored yellow-green. They possess a pair of forelimbs with small claw-like hands, a mouth, and a lizard-like tail. They are incredibly sensitive to heat; even direct exposure to the light of a table lamp is enough to cause a pollywog extreme discomfort. During this stage, they appear to be opportunistic feeders, as Dart was found foraging for food in a trashcan and ate a candy bar it received from Dustin.

Unlike other stages, the third stage of the cycle is not entered by the creature molting. Instead, this stage is signaled by the pollywog's skin taking on a dark green color, as well as an increase in body mass. The pollywog will then sprout a pair of hind legs, becoming quadrupedal. Small, sharp teeth begin growing in the creature's mouth. 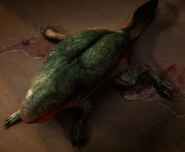 Once the pollywog has eaten a sufficient amount of food, it molts, growing a little larger than a standard house cat. It is in this stage that the juvenile Demogorgon develops the signature “petal mouth” that the species is best known for. In addition, the juvenile becomes carnivorous. Its skin takes on a darker color and is resistant enough to heat that it is able to walk in direct sunlight with no injury. 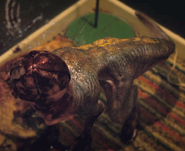 Dart at Stage Four with an open mouth

Upon molting to the penultimate stage of their life cycle, the adolescent Demogorgon develops to a much larger version of their previous form, which Dustin referred to as a “Demodog”. Now roughly the size of a large dog, the Demodog is strong enough to tackle a grown human. They are proficient in digging tunnels and are able to climb steep precipices. While a Demodog is not invulnerable to gunfire, its skin is thick enough to resist several gunshots.

A Stage Five Demogorgon at the Hawkins junkyard

A Stage Five Demogorgon near the Gate

After molting for presumably a final time, the Demogorgon emerges as an adult. Adult Demogorgons are bipedal and reach a height of approximately 6 - 10 ft. They possess immense strength, being able to knock a door off its hinges and pin down an adult human with ease. Their sense of smell is exceptionally potent, being able to detect a small amount of blood from the Upside Down. Their skin has grown durable enough to withstand gunfire and numerous attacks dealt with a spiked object. One of the few things shown to cause a Demogorgon any type of significant harm was being burned, but even then the creature was able to escape fairly easily and did not seem to be hindered by its injuries.

The Demogorgon that plagued Hawkins in 1983 could open inter-dimensional portals and appeared to possess limited telekinetic ability. It is unknown if all adult members of the species possess these abilities, or if they were somehow exclusive to that individual. It is also unclear whether or not this individual was under the control of the Mind Flayer. Another Demogorgon was kept in a Soviet gulag in 1985, in order to devour political prisoners. 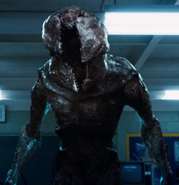 A close-up of a Stage Six Demogorgon 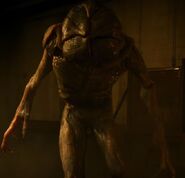 A Stage Six Demogorgon in Russia

The Duffer brothers wanted to use practical horror elements and a person in a suit that could interact with the actors in real-time for creating the monster of Season 1 and so, the adult Demogorgon was shot via motion capture practically with performer Mark Steger on the creature's suit. However, for creating all the other Demogorgon stages in Season 2, the visual effects team used CG.