Castle Byers was a makeshift fort made by Will and Jonathan Byers in the forest near the Byers house. Filled with pillows and quilts and decorated with his drawings, it was Will's personal space where he could draw and read comics. Signs on the front read "Castle Byers", "Home of Will the wise" and "All friends welcome." Castle Byers was destroyed by Will in 1985 as a way to let go of his childhood memories.

Will drew Castle Byers before it was created. Castle Byers was built by Will Byers and Jonathan Byers the night of their parents' divorce. As they were building the fort, it began to rain. However, they continued the project anyway, working on it all night until they were finished which led to them becoming sick.

After Will's disappearance, Castle Byers was the first place Joyce, his mother, thought to look. When Joyce went inside Castle Byers, she had a flashback. [1]

In the Upside Down, Will hid in Castle Byers after leaving his house. He stayed there for three days, hiding from the Demogorgon. Eleven used her abilities to locate and communicate with Will and told him Joyce was coming for him. A very weakened Will could sense her in the void and said she must hurry. Eleven told him to hold on a little longer, but she suddenly lost contact and Castle Byers disappeared along with Will.

As Will sang "Should I Stay or Should I Go" to comfort himself, the monster broke through the walls of Upside Down Castle Byers, took Will and brought him to its lair in the library.[2] When Joyce and Hopper entered the Upside Down, they found the remains of Castle Byers scattered across the ground. After that they managed to track the Demogorgon to it’s layer were they found him with a vine in his throat.

After storming off from his friends at the Wheeler residence, Will retreated to Castle Byers instead of going home. He ripped apart some of the photos and drawings in there before taking a bat and partially destroying the castle in a fit of rage. Afterwards, sitting in the rain and crying, Will sensed that the Mind Flayer has returned to Hawkins via a pain in his neck. What's left of the castle is mainly just a shell, although it's likely some of his possessions could still be intact.

Inside of Castle Byers.

Looking out of Castle Byers

Castle Byers in the Upside Down 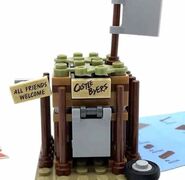