watch 01:12
Who is Barbara Holland?
Do you like this video?

Barb (by most people)
Miss Holland (by Sam Owens)

Barbara Holland, more commonly referred to as Barb, was a recurring character in the first season of Stranger Things. She was the best friend of Nancy Wheeler. In late 1983, Barb mysteriously vanishes, which leads Nancy and Jonathan Byers to investigate her disappearance. Eventually, it was revealed that she had been killed by the Demogorgon. In 1984, following an acknowledgment of Hawkins Lab's involvement in her death, she was given a proper funeral.

Barbara Holland was the daughter of Mr. and Mrs. Holland. She attended Hawkins High School and at some point became the best friend of Nancy Wheeler.

In 1983, Nancy began dating Steve Harrington, a popular boy at school, making out with him "a couple of times". Nancy and Barb went clothes-shopping one weekend, with Nancy seeking to impress Steve.

Barb seemed cautious about Nancy's relationship with Steve and her growing popularity. She expressed her dislike of Steve's friends Tommy and Carol, telling Nancy she wanted to keep "hanging out" with her.

Barb reluctantly agreed to drive Nancy to a party at Steve's house. At the party, she attempted to shotgun a beer can, opening it with a knife so she would fit in with the others - however, she accidentally cut her hand in the process. This led to Barb going to the bathroom to tend to her hand whilst the others uncaringly carried on having fun without her.

Feeling frustrated, Barb confronted Nancy as she went upstairs to Steve's bedroom. She emotionally suggested to Nancy that she thought she was acting superficially, and not being true to herself. Nancy did not take her seriously, brushing her off and telling her to go home.

A lonely Barb sat by the now vacant pool, looking into her reflection and contemplating. As she did so, blood from her wound trickled through her bandage, splashing and dissolving in the water. The Demogorgon was attracted by the scent, suddenly appearing behind her and pulling her into the Upside Down. Jonathan Byers unknowingly captured this moment on camera as he hid in the nearby foliage.

At around the same time Barb had just awoken in the Upside Down, Will Byers was walking down the street nearby when he heard her cries for help as she cried out for Nancy repeatedly. Will ran as fast as he could, but by the time he reached the pool, Barb was long gone and all that was left of her were the pair of glasses that she had been wearing.[1]

Both Nancy and Mrs Holland grew increasingly worried about Barb when she did not show up to school the next day. When Will's (fake) body was found, a devastated Mike returned home where his mother and father were meeting with Barb's parents, Nancy finally having revealed that Barb was missing. A few days later, Eleven, while immersed in a deep psychic state, scoured the Upside Down to find Barb and Will Byers. She discovered Barb's body, witnessing a slug-like creature slithering from Barb's mouth and across her face.

Later that night, Chief Hopper and Will's mother Joyce entered the Upside Down of the public library as the search for Will continued; they walked past the remains of the Demogorgon's victims, including Barb's corpse.

A year later, Barbara's death acted as the inspiration for Nancy and Jonathan in their endeavor to expose the Hawkins National Laboratory. With help from a private investigator, Murray Bauman, who was also investigating Barb's death, the three worked together to release evidence recorded from Dr. Owen's confession. Eventually it was a success that resulted in the shutdown of Hawkins Lab, and Barbara was finally given a proper funeral.

Barb was a kind, cautious, sensible and smart girl. When Nancy went to Steve's house, Barb wasn't at all happy about it, due to her dislike for Steve, Tommy H and Carol. Nevertheless, she agreed to chaperone her best friend even though she vehemently didn't want to attend the party. She was ultimately made fun of by Tommy H and Carol and brushed off by Nancy who was more interested in spending time with Steve. This caused her to reflect miserably by the pool instead of going straight home, which ultimately led to her death.

*Barbara's corpse was seen in "The Bathtub" and "The Upside Down" after her death in "Holly, Jolly". Barbara can also be seen via photograph in "The Body" as well as in "MADMAX", "The Gate" and “The Battle Of Starcourt”. 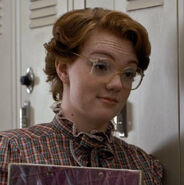 Barb sitting alone by the pool.

Barb before the Demogorgon takes her.

Barb in the Upside Down

Retrieved from "https://strangerthings.fandom.com/wiki/Barbara_Holland?oldid=57976"
Community content is available under CC-BY-SA unless otherwise noted.