Andy, portrayed by Clayton Royal Johnson, is a recurring antagonist in the fourth season of Stranger Things. He is Jason's friend and teammate.

Andy was born around 1967-1968. Nothing is known about his family life. In 1982, Andy attend Hawkins High School and was friends with Jason Carver, Patrick McKinney and Chance. They became close and joined the basketball team together.

Unlike the mild-mannered Patrick and affable Jason, Andy is crueler and more ruthless than the rest of his basketball teammates. He has no qualms about making insensitive jokes, like mocking the death of a student before realizing that the dead student was Jason's girlfriend, Chrissy Cunningham. Andy is also very self-centered as he mocked those who weren't popular than him and his friends. In addition, Andy was willing to hurt younger children where he threatened to break Erica Sinclair's arms when he pinned her down, despite her being a minor.

Andy was first seen alongside Jason Carver in behind-the-scenes photos released in 2020. 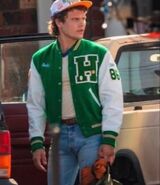